The wedding sand ceremony is becoming a popular choice for couples who want to replace the unity candle with something more permanent and safe. I’ve observed three common mistakes that brides and grooms make during the ritual that are easily to avoid. 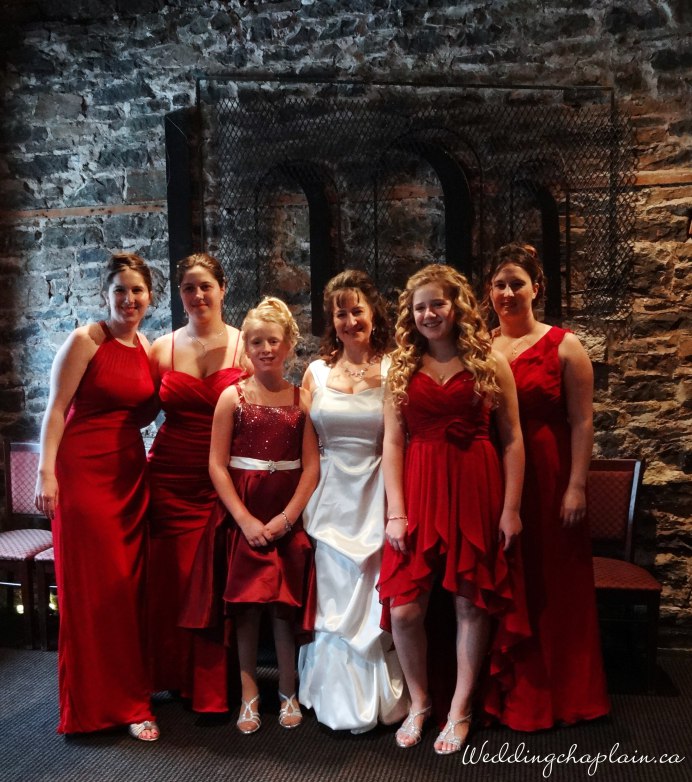 Nathalie and Richard were getting married and it was the second weddings for both of them. The blended family would result in 5 girls aged 9, 12, 20, 22, and 24 years. The girls were an integral part of the wedding. They were all bridesmaids each with their own style of red dress. The family looked wonderful together.

As part of the symbolic union of these two families, Nathalie and Richard wanted a Unity Sand Ritual performed during the wedding ceremony.

Couples often prefer the Unity Sands over the Unity Candle ritual because it has the same symbolism (of joining) while being more versatile (choosing colors and who adds sand), is visible in daylight, can be easily used outdoors and is safer (no fire to deal with). In addition, the bride and groom have a beautiful reminder of their commitment.

Nathalie and Richard chose the color of sand for themselves to pour in as a base. They also wanted to have each of the girls add their specifically chosen colored sand into the central container. You can see the set-up for the ritual. 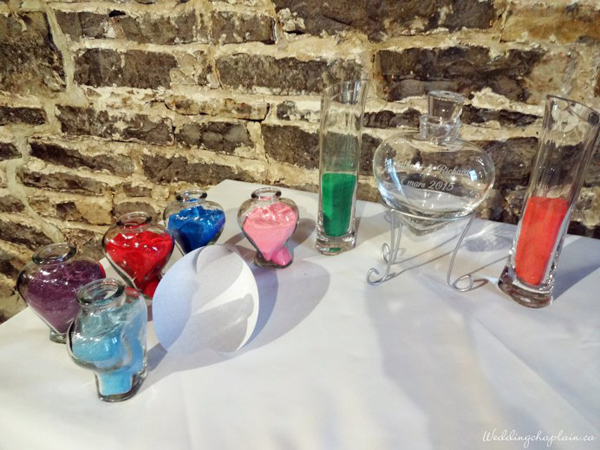 Using this wonderful wedding as a backdrop, lets explore the 3 common mistakes that can be avoided during a unity wedding sand ritual:

The container’s opening is too small. The heart shaped container that Nathalie and Richard used is very fashionable. However, its opening is very small to try and pour sand into. This issue is easily solved by using a funnel – as shown in the picture.

Miscalculating the amount of sand. This is an issue particularly if you have many people pouring sand in the container, which happened at Nathalie and Richard’s wedding. We had to estimate the amount each could put in so that all the sand could be included and the container ended up overflowing. This mistake can be avoided by measuring your container in advance; just fill it with water and empty it into a measuring cup to see how many milliliters it can hold. Then you can divide up the number of people’s sand so that all will fit in the container. 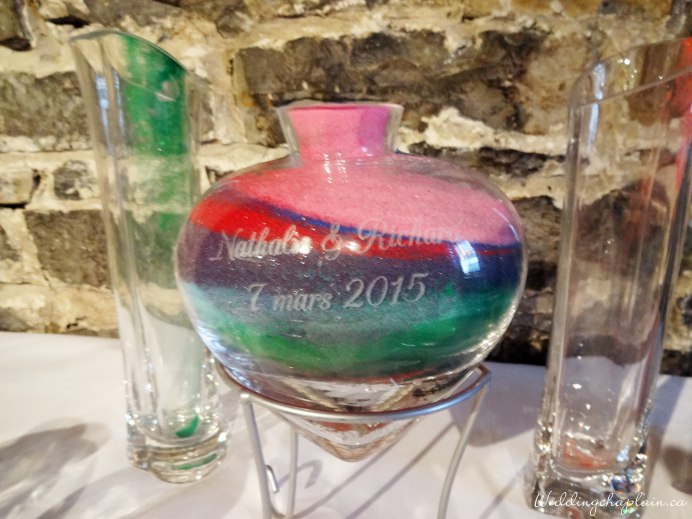 Leaving the filled container behind. You’ve been declared married and head down the aisle to get pictures taken or start the cocktail hour. Don’t forget this pretty memento that you just created and leave it behind where it may get lost. Nathalie and Richard designated someone to pick it up and put it on display on their head table.