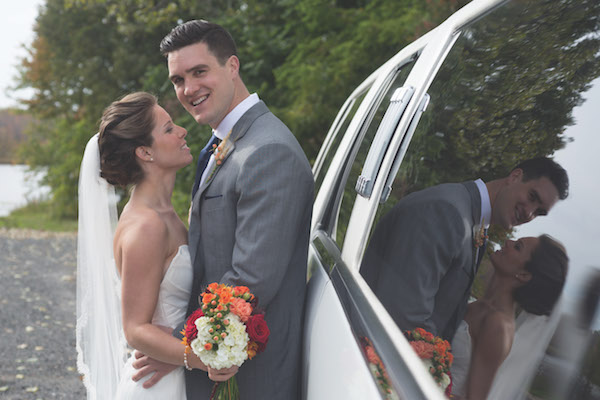 Catherine and Rob met while working at the same bar on Rideau Street in downtown Ottawa. Despite the cautionary tales of work relationships gone wrong, the pair threw caution to the wind and decided to take a chance.

“One of the cardinal rules of the bar industry is that bar relationships don’t last, or if they do, are wrought with drama. We both had our minds in the right place and knew what we wanted, and it all worked out in our case.”

Catherine and Rob would dispel another relationship myth when Rob accepted a position as a firefighter with the Air Force and headed to Borden, Ontario for a year of training, forcing the pair into a long- distance relationship that saw Rob drive home every weekend to be with Catherine. It was on one of those trips home that he asked Catherine to be his wife.

The pair chose to say their “I do’s” in front of 85 guests at Temple’s Sugar Bush.

The bride appeared with her mother and father by her side holding a beautiful bouquet of hydrangeas, dark red roses, fall mums, orange spray roses and orange hyperiucum berries provided by Petals and Paint.

“I wanted Rob to be a part of my dress selection but he always refused. After I purchased my dress, I couldn’t wait for him to see it. In the end, it was worth the wait and I was very happy he hadn’t seen it beforehand. His reaction was priceless. Our photographer captured those moments during our first look.”

As a nod to the season, Rob’s aunt created each “placecard” using gourds with a wooden name tag for each guest. Each table was topped with a bundle of wheat tied with orange ribbon and the mantel was adorned with pumpkins and wheat.

Another DIY creation came together the night before the wedding, as the bride-to-be found a window of opportunity while her son was napping to make the seating chart for the day.

Surrounded by the beautiful colours of the changing season, Catherine and Rob enjoyed a day filled with love, laughter and those who mean the most. W