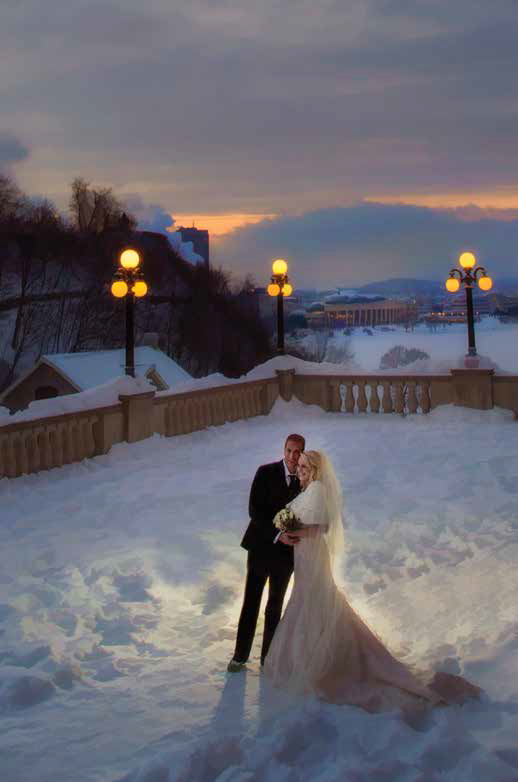 When Jennifer Cogswell and Jean-Philippe Thivierge began planning their wedding, they knew they wanted a day that would not only celebrate their love, but also their inspirational stories of survival. “Our story begins before we met. A few years ago, both of us received devastating news – we were diagnosed with cancer.”

In the fight of their life, they each decided to attend a local support group in Ottawa.

“A mutual friend in the group suggested that we meet. As we sat down in a small café, two hours flew by. We talked about everything; from relationships, to family, to our work, and yes, even cancer. We were inseparable after that.”

Knowing he had found the love of his life, Jean-Philippe decided to make his own birthday an extra special occasion. Following Jean-Philippe’s birthday dinner, the pair headed to the Château Laurier. Although unsure of what was to come, Jennifer knew something was up.

“He was so nervous he barely ate anything for dinner and jumped out of his chair afterwards.”

Upon entering a room showered in flowers, Jennifer discovered a “clothesline” of photos of the couple. “He had written ‘Jen will you marry me?’ on the back of the pictures. I was so shocked. He said a beautiful speech but I was so surprised I don’t remember a thing!”

A year and a half after finding one another, Jennifer and Jean-Philippe tied the knot December 31, 2013 at Saint Brigid’s Centre for the Arts.

“We fell in love with the beautiful space. I always wanted to walk down a long aisle with light shining through stained glass windows.”

Purchased at Paula’s Bridal in St. Catharines, Ontario, the bride’s white dress sparkled as she approached her groom.

“I loved my dress! It was not what I had envisioned wearing, but it was amazing for New Year’s Eve.”

The bride’s bouquet of silk, pearls and roses also held a heart as a tribute to her late grandmother.

Jennifer and Jean-Philippe incorporated their own unique touches into the ceremony. Upon exchanging rings, Jean-Philippe’s daughter joined the couple to receive a jeweled necklace. The jewel was given to her when the couple got engaged.

“We wanted her to know it wasn’t just a day for the two of us; we were becoming a family together.”

The couple chose to return to their proposal site for their reception, which was a celebration of renewal, not to mention a great way to kick off the New Year.

The pair chose a colour combination of silver, champagne and dusty rose and pops of sparkle were found throughout to coincide with their “New Year’s Eve elegance” theme. Hats, noisemakers, beads, a photobooth and much more were all ingredients to a fabulous New Year’s Eve bash.

“We wanted the wedding to be elegant, but because it was New Year’s Eve, we knew it would also be a huge party! We wanted something different from the typical outdoor spring/summer wedding. With crisp white snow and the Château Laurier it felt like a winter fairytale.”

The party was kicked off with a special surprise choreographed dance by the newlyweds. The couple broke out into Michael Jackson’s Smooth Criminal – “a song Jen would practice on the Wii between bouts of chemo.”

Because of the overflowing of sweet treats, the pair opted for a small red velvet cutting cake. In lieu of gifts, Jennifer and Jean-Philippe made a donation to Young Adult Cancer Canada – the group where they first met.
“We wanted to start off the year together celebrating with our friends and family and remembering those who were no longer with us. After being through such an illness, you live life to its fullest. When it is right, you take that leap of faith.” W