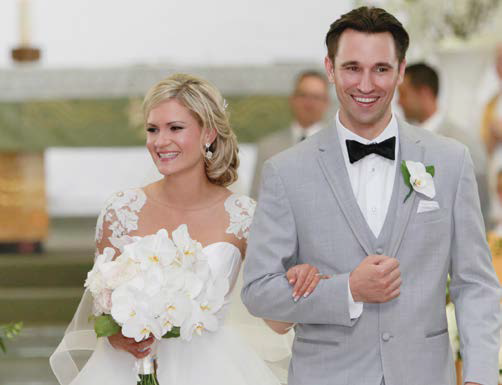 Jessie and John met through a mutual friend and went on their first date at John’s friend’s restaurant EVOO in 2013. They would later discover that John had moved to Ottawa with his family from Smith Falls and lived only two blocks away from where Jessie grew up. 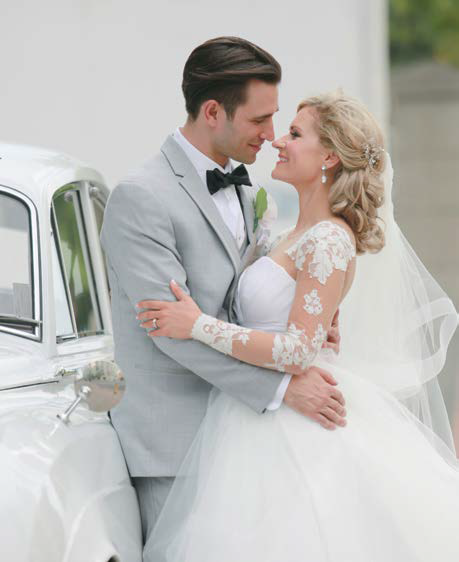 Two years later, while at the tree farm picking out the Christmas tree, John asked Jessie’s father for permission. On Christmas Eve, as they were about to leave Jessie’s parents’ house to attend church, a family tradition, John proposed. “He had wanted to do it in front of my family because it’s important to me,” Jessie said. “It was a complete surprise to everyone.” 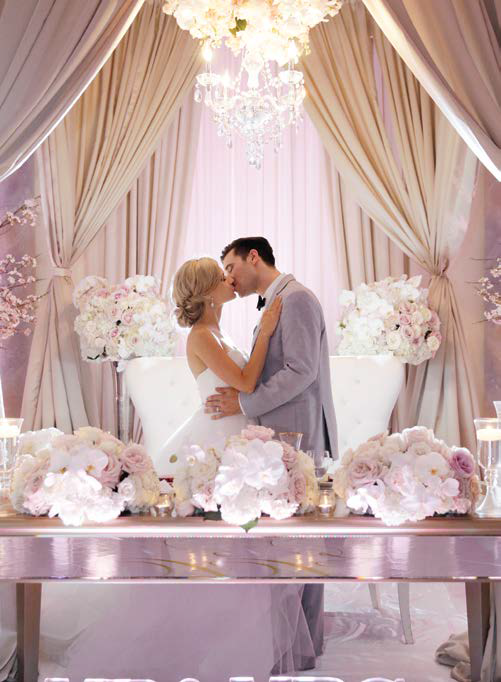 The wedding ceremony took place at Canadian Martyrs Catholic Church, the church where Jessie’s family has attended for generations. The priest who officiated the ceremony was the same priest who married Jessie’s parents, 30 years prior.

Jessie walked down the aisle in a strapless Hailey Page gown with a sweetheart neckline. “I thought I wanted a fitted dress, but I ended up with a big ball gown,” said Jessie, who found the dress at White Satin Bridal Boutique. The boutique custom-made detachable lace sleeves with lace ordered from Hailey Page, for her to wear during the church ceremony.

The reception was held at the Chateau Laurier. “I always pictured it at the Chateau,” said Jessie. “It’s a castle. You feel like a princess for a day.” After seeing the Lac Leamy fireworks in 2015, Jessie had an idea of how to incorporate fireworks into the wedding without having to pay the hefty cost. They chose a date that coincided with the annual fireworks display that takes place across the river, by the Canadian Museum of History.

It was a small and intimate wedding with 80 of their closest family and friends. “I wanted a big, beautiful room in a beautiful hotel like the Chateau Laurier, but I still didn’t want a huge wedding where I didn’t get a chance to sit down and see everybody and talk to everybody.” 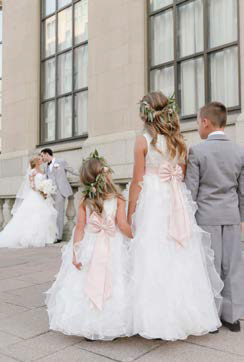 In keeping with the classic, elegant theme, John found a vintage Rolls Royce in Montreal and had it delivered to Ottawa for the wedding day.

The reception was held in the hotel’s Adam Room, where the bride and groom sat under a specially built canopy with a chandelier with flowers hanging above them. Jessie was at first worried that the bright blue colour of the walls would clash with her wedding colours of blush pinks, greys, golds, silvers and whites. But thanks to expertly placed up-lighting around the room by the wedding DJ, “The room looked pale pink — it was completely transformed,” Jessie marveled. “The first time we saw the room was breathtaking. It was amazing, it went from a blue room to a pink room!”

Looking for a wow factor to add to the reception, Jessie found the idea of mirror-topped tables on Pinterest, where the whole top of the table was a giant mirror to reflect all the light in the room. They had mirrors custom-cut to fit the tables at the Chateau Laurier. “It was expensive, but it looked so great in pictures. There was lots of light, sparkle and glitter,” said Jessie. 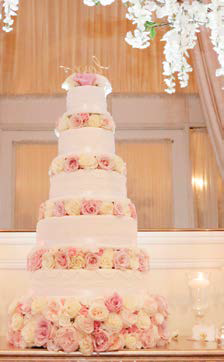 The wedding cake was a real showstopper — six tiers, each a different flavour — and decorated in-between each tier with fresh, real flowers. Sitting on top of a mirror, it was so tall that the couple had to stand on a pedestal to cut into it.

After dinner, everyone went out onto the terrace to watch the fireworks. Jessie and John had their own private table, where they enjoyed champagne and chocolate- covered strawberries. “It was important throughout the day to have those little moments together.” W 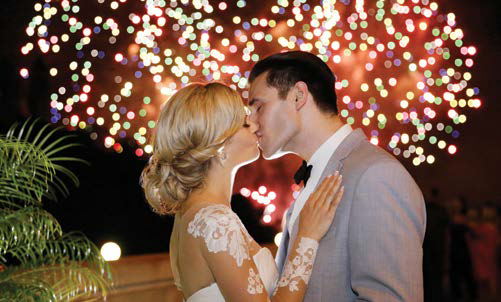