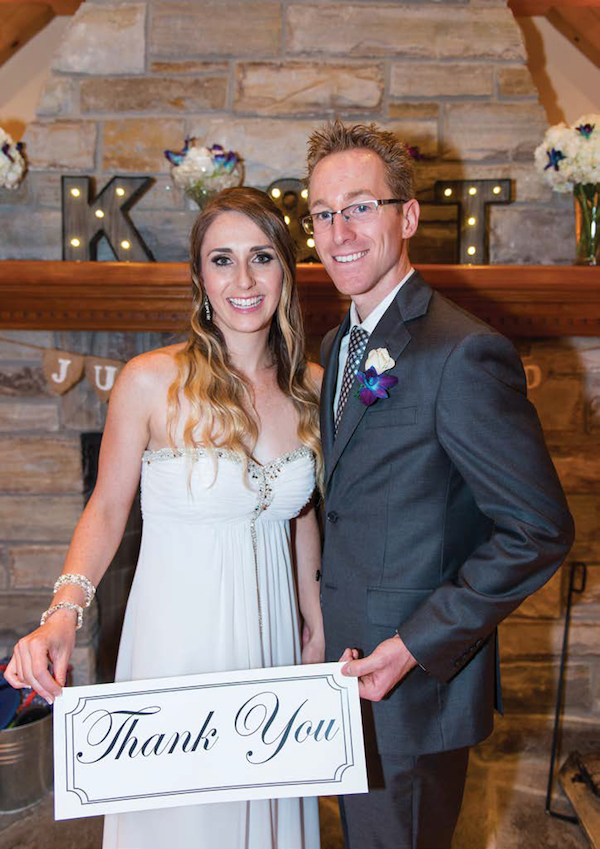 Being True to your Couple Style

Kristen and Todd broke all the traditions. On the rainy Saturday morning of July 9 they woke up together in their home before Kristen headed off to hair and makeup with her bridesmaids, leaving Todd to an easy-going morning with his groomsmen. But the two were only separate for a few hours, meeting back at the bride’s parents’ house for lunch before setting off to the venue.

Kristen got ready in her childhood room with her bridesmaids while Todd and the groomsmen waited downstairs. As the bride slipped on her very custom-altered gown from Dominique Levesque Bridal Salon, her bridesmaids (who are all high school and college friends) waited to see their girl in another room. “It felt so nice … I had all my bridesmaids with me — I was excited but calm. I just felt like I was back at school hanging out with my friends.”

The bridal party travelled together to Temple’s Sugar Bush. From the moment of their arrival, it felt flawless. The rain had stopped as they were arriving at Temple’s, the venue was set up to their specifications. When it was time for the ceremony, Temple’s had planned both an inside and outside location due to the unforgiving weather.

Todd and Kristen pulled another non-traditional — they walked down the aisle together. They have been together for years, they already live together, and Kristen wanted her parents to be able to walk down together. “It totally represents us,” she said.

So in went the bridesmaids, also accompanied by their dates, the groomsmen, walking down to an upbeat song by Hall and Oates, followed by the soon-to-be-betrothed duo. “I couldn’t have asked for better people to be standing up there with us.”

Following a quick and simple ceremony, the couple was free to mingle with their guests during cocktail hour. For dinnertime, the couple eschewed the traditional grand entrance. “We’re already here, we’re not the type of people who like being the centre of attention.”

The bridal party was seated throughout the hall amongst their friends and loved ones, while Todd and Kristen enjoyed a sweetheart table at the front, just for the two of them.

“It meant so much for me everything that everyone did — the bridesmaids, the groomsmen, everyone that attended — it’s expensive! Weddings are expensive. It can be far for people too — that’s something that Todd and I will always look back on. It was a great day, but it was the people who were there, that’s who made it fun. That’s one thing that I can take away from it. Anything could have happened — it doesn’t matter if your flowers didn’t turn out exactly how you wanted or if the music is a little different than you wanted. It’s the people that make it.”