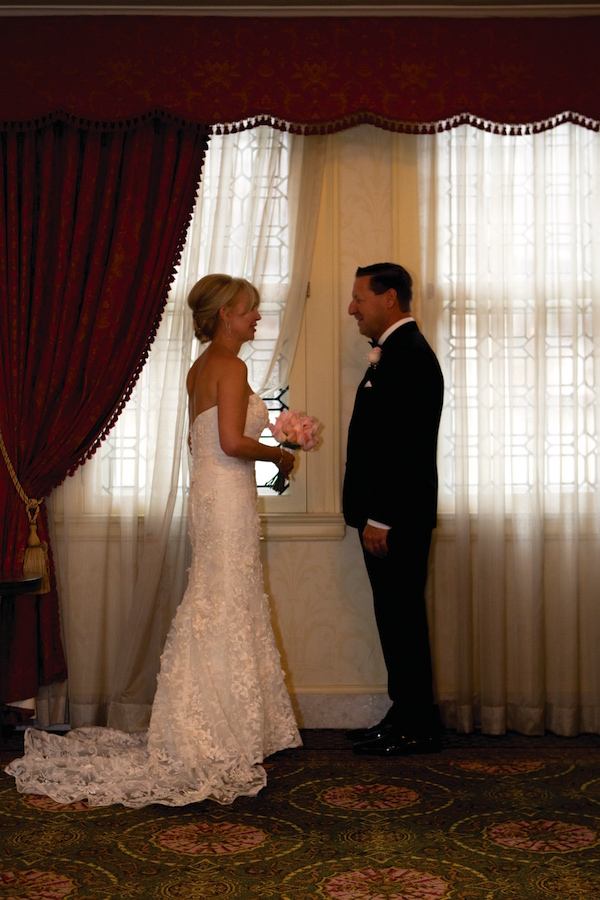 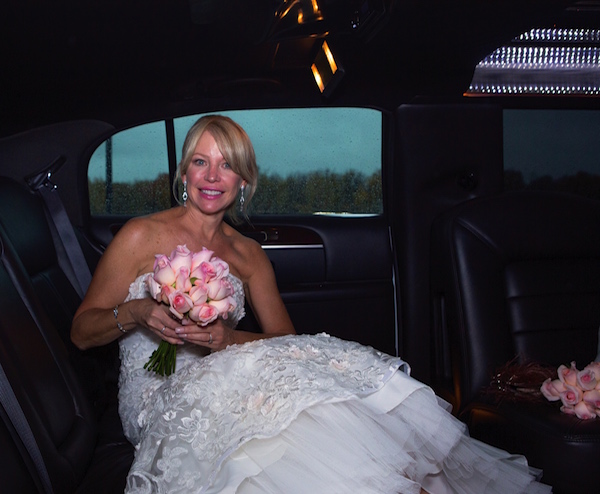 When Louise and Guy met through a dating website, “it was love at first sight for me,” said Guy. Louise describes their first date as the most romantic date she had ever been on.

“From the beginning, he wooed me,” said Louise. “For several weeks, he was sending flowers to my office. To this day, almost on a weekly basis, he buys me flowers.

The couple had been dating about three months when Guy proposed by taking her to the Wakefield Inn and Spa. At the restaurant that overlooks the waterfall, he had arranged with the maitre d’ to bring out the ring box with dessert. “When he placed the little box in front of Lou, I got down on one knee and asked her to marry me,” said Guy.

Since they each had children from previous relationships, they wanted to wait to get married until the kids were older. “We had a long engagement, but through that period we have been madly in love,” said Guy. “We are very traditional, and marriage was important to us even though we’ve been together for 10 years.” They decided to marry a month and a half before their 10-year anniversary. “We knew we wanted it to happen in 2016,” said Louise. “It marked a significant milestone.”

Their vision for the wedding was intimate and high-end. “We wanted something classy and elegant, but at the end of the day, people could be themselves,” said Guy. They chose Sterling restaurant in Gatineau, a favourite restaurant of theirs, as the venue. Louise walked down the aisle in an Oleg Cassini dress from David’s Bridal. It was the first dress she tried on. “Like Guy, I knew it was the one,” she said.

The ceremony was held in the cellar room. Louise’s daughter was her maid of honour.

The guests enjoyed drinks in the private bar area while the bride and groom took wedding photos in the restaurant’s spectacular wine cellar and cellar room. The couple had also taken wedding photos before the ceremony at the Chateau Laurier after a plan to take pictures at Avalon Lake in Orleans fell through due to the weather forecast.

Following the ceremony, the guests had an intimate five-course meal in the restaurant’s private dining room that overlooks the Gatineau river. Guy, a wine collector, selected the wine pairings for the meal. One of the wines he chose was a 2006 Super Tuscan wine, which held special meaning for the couple. “We’ve been to Italy and Tuscany, and 2006 was the year we met,” said Guy. “We wanted to celebrate our love and acknowledge the 10 years we’d been together.”

A playlist of 150 favourite love songs carefully chosen by the couple played throughout dinner. They hadn’t planned on a first dance, but then the song ‘Love You ‘Till the End’ from their favourite movie, P.S. I Love You, came on. “I got up and asked her to dance,” said Guy. “It was very special to us.” The couple did a small waltz in the corner of the room, a moment captured by their photographer.

“We are best friends and we were looking forward to the wedding for a long time,” reflected Louise. “It was truly magical that it all came together.”