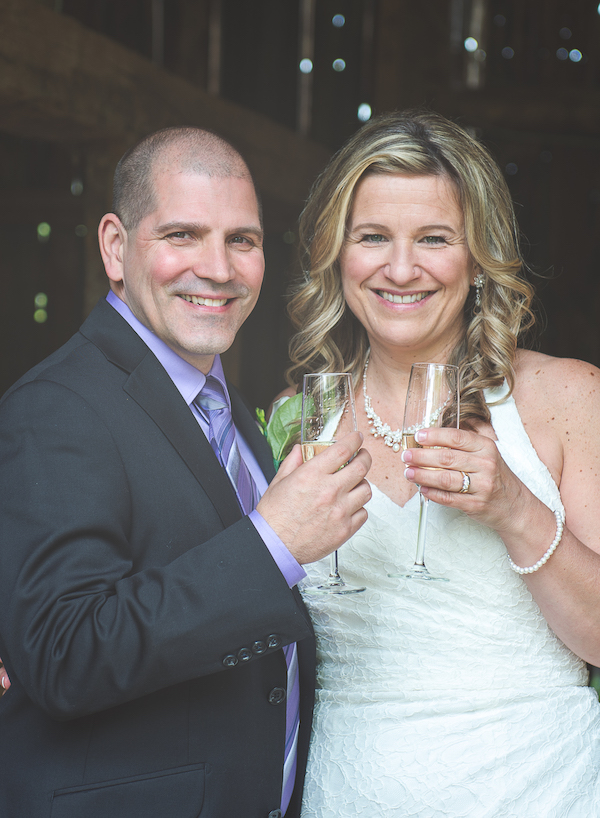 An impulsive comment on an online dating site was the start of Lucie and Jeff’s happily ever after.

With their rst date lasting over nine hours, Jeff knew he had met the one. A little over nine months later, he asked Lucie to be his wife. But not before receiving the blessing of those nearest and dearest to the couple – Lucie’s mother, her two children and Jeff’s four children. As Jeff held a three-prong bauble representing the couple’s past, present and future, Lucie said “yes” to the love of her life in the presence of loved ones.

Three weeks later, a ceremony built for two was planned at a small country setting in Oxford Mills, Ontario. The rustic venue with a country vibe was the perfect setting for these nature lovers.

The couple exchanged vows in the entrance of a rustic wooden barn with only the of ciant and photographers as witnesses. Upon saying “I do,” the intimate party enjoyed a bottle of bubbly and the couple took a stroll around the luscious green grounds of the farm.

For their rst dinner as husband and wife, Lucie and Jeff made their way to the Brigadoon Restaurant – a quaint and rustic nearby dining establishment in Oxford Mills. At a cozy table for two, the newlyweds were deservedly spoiled by the generosity of strangers, who offered up glasses of celebratory port and impromptu gifts – all the makings of that quintessential small-town charm.

When planning the most special day of your lives, sometimes the meaning of the moment can get lost along the way. We think this couple got it just right. W