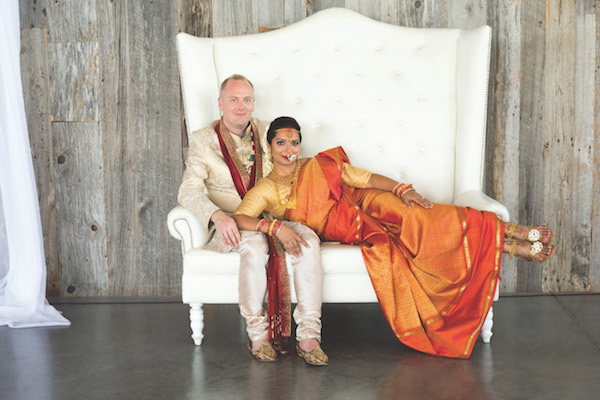 Compiled by Ariel Vered and Photos by KATHI ROBERTSON

Radha met Stephane in the summer of 2013 at a barbecue through mutual friends who knew her parents. “They thought Steph and I might make a good match.” Two years later, in July 2015, Stephane moved into Radha’s house. To celebrate, Radha had invited their parents and three of her friends over for a Sunday barbecue and Stephane insisted on serving a particular sparkling wine from the Hinterland winery that they’d visited in Prince Edward County. “He made me drive to three LCBOs and I couldn’t figure out why,” she said. “He wanted to have it there because he knew he was proposing.”

That kick-started a year of wedding planning for the three-day event, which included Radha traveling to India. The festivities began with a Thursday night family dinner at her parents’ house and a female-only family and friends lunch on Friday held on the Shopify terrace. The main events on Saturday, an Indian-style ceremony in the morning and a Western-style ceremony in the evening, took place at the Horticulture Building, which they chose as a central location to make travel easy for their guests. An added perk: it is traditional for the altar in an Indian ceremony to face east, so with the Horticulture Building’s windows oriented on the east side, light filled the room during the morning ceremony. “Sitting at the altar during my wedding ceremony, it was more beautiful than I could have ever imagined,” Radha said.

Throughout the wedding weekend, Radha wore custom-made Indian outfits. Her Thursday night outfit had sentimental value, made from a sari of her aunt who had recently passed away. For the morning ceremony, she wore an orange and pink silk sari blessed at one of India’s big temples that her parents had purchased for her years earlier to wear on her wedding day. As part of her wedding jewellery, she wore a nose ring that her late grandmother had left for her specifically for this occasion. In the evening, she wore an outfit bought in India. Stephane wore a custom-made Indian outt that Radha picked out in India for the morning ceremony and a custom-tailored Sur Mesur suit for the evening.

The couple wanted their wedding to reflect themselves and their heritage. Both lovers of food, they wanted something different than the typical Indian buffet for their reception. The other wedding events featured Indian meals, so for the Saturday evening meal, they served a four-course Western-style plated menu that incorporated Indian flavours and flair.

Radha worked with Julie from Chic Wedding Planners — “ The best money I spent was on my wedding planner,” she said — to establish a cohesive wedding theme that integrated the wedding colours of soft shades of pinks, corals and gold throughout. While the couple enjoyed a few hours of relaxation between ceremonies, the Horticulture Building was transformed. “I remember thinking, ‘ This is exactly what I wanted,’” she said. “ The room looked absolutely phenomenal.”

The tablescape featured custom favour boxes in the wedding colours made by a paper company in India, which Radha picked up herself on her trip. Inside the boxes were lemon chili caramels from Morsel Caramels. Another special touch was gold-rimmed glasses brought in from Montreal, which added a stunning element to the table. “We wanted it to be a big glamorous party,” said Radha. “I really felt like everything came together in a really gorgeous way.”

They also strived to make sure their guests were comfortable. The ceremony programs were printed as fans so guests could fan themselves on the hot August day, since the Horticulture Building has no air conditioning. They served breakfast for the guests when they arrived at the morning ceremony and in the evening, they handed out ip ops. “It was important to me and my husband that everybody had a great time,” Radha said. “We put a lot of thought into how to make that happen.” 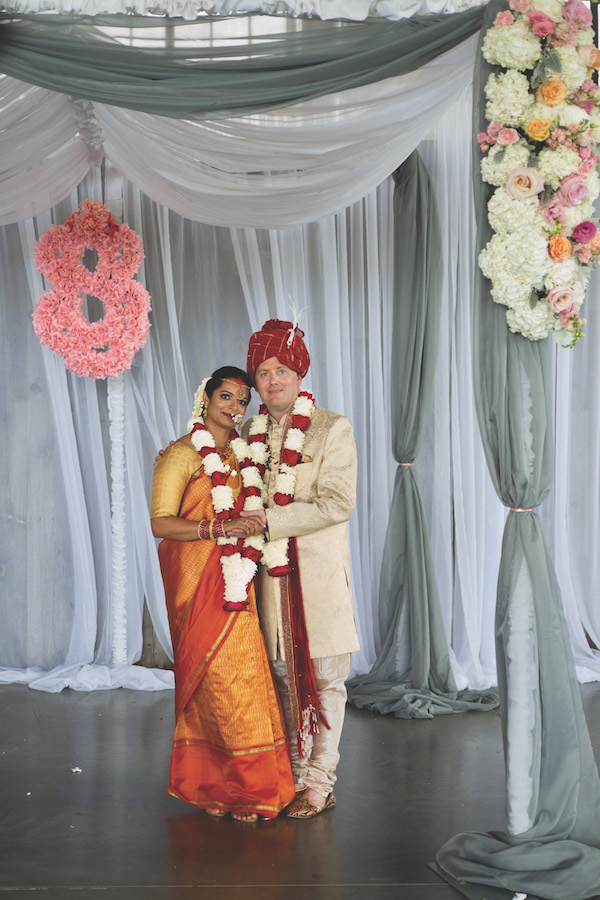