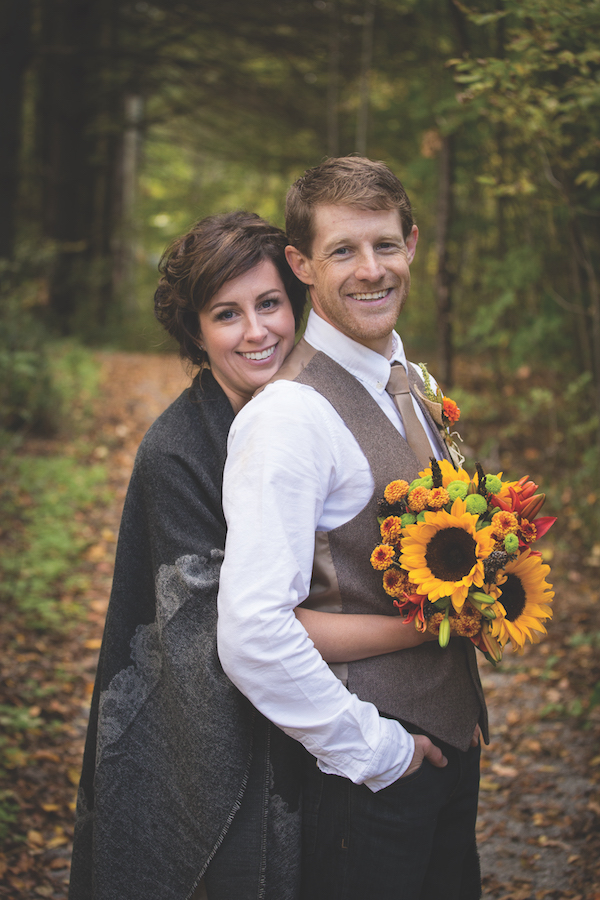 Our dogs brought us together,” says Stacey of meeting Curtis over three-and-a-half years ago. Stacey was out walking her Hungarian Vizsla dog one day, when a passerby mentioned they had just passed someone with the same breed of dog. “I ran to catch up, so we always say that I had to run him down,” she laughed.

To propose, Curtis worked in cahoots with one of Stacey’s best friends and her boss. “Trying to deceive Stacey is tough to do,” he said. One day in January 2016, Stacey was in a meeting fabricated by her boss, when Curtis walked in and announced that they were going on a get away ski weekend to Calabogie. After spending the day outside, Curtis set up a roaring fire and set up tea lights in the shape of a heart. “She came inside the house,” he said, “and I was on bent knee.”

The couple considered waiting until they bought a country property of their own to get married. Ultimately, they decided to get married rather than wait and, in just seven weeks, organized a wedding that was low key, outside and economical. “It was one of those serendipitous things where everything eventually all came together,” said Curtis. They picked the Sunday of Thanksgiving weekend so that people would have the next day off. An added perk was that they easily found a photographer, DJ and venue available because it was a holiday.

Stacey and Curtis wanted their wedding to reflect them as a couple. They knew they wanted to get married outside and near the water since they both love kayaking and canoeing. Since the Thousand Islands area is close to their hearts, they were married at Mallorytown Landing in Thousand Islands National Park, in front of family and friends and their two dogs. As a nod to their love of the outdoors, the couple donated to Thousand Islands National Park to have two red Muskoka chairs installed at their favourite spot in lieu of party favours.

Stacey, wearing a wedding dress she found on the website Kijiji, made her bridal entrance to the ceremony site via a cedar strip canoe made for Curtis by his dad. She was accompanied by a special friend with whom she had made a cedar strip kayak years ago. Following the ceremony, the wedding reception was held at nearby Happy Life Farms, whose collections of antique objects fit the wedding’s rustic theme.

“There’s no way it would have happened without our friends and families,” said Stacey of all the wedding’s personal touches. “They made it unique and possible in seven weeks.” Stacey’s mother and aunt making 30 pies for dessert. As a surprise for Stacey, Curtis had her friend make a cookies and cream cake — Stacey’s favourite — that looked like a birch bark piece of wood with their initials carved. It was topped by a picture of Curtis’ canoe and two red Muskoka chairs. Curtis, who has become a woodworker, made a customized wooden table for the cake that featured their wedding date and a heart that said Stacey and Curtis.

After their first dance to “Golden” by Lady Antebellum, a love song that they often dance to in their kitchen, the couple and their family and friends danced the night away. “I think there was five minutes that I wasn’t on the dance floor,” said Stacey. “It was so much fun.” W 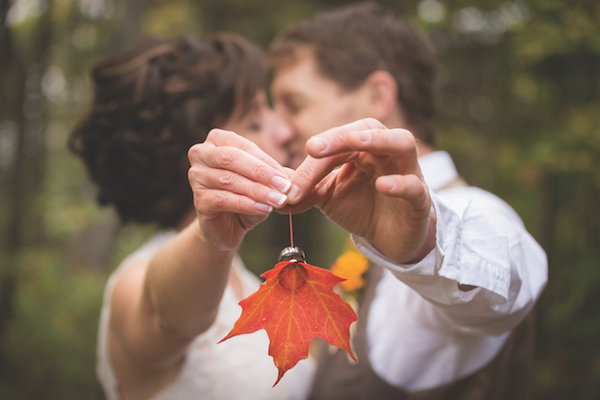