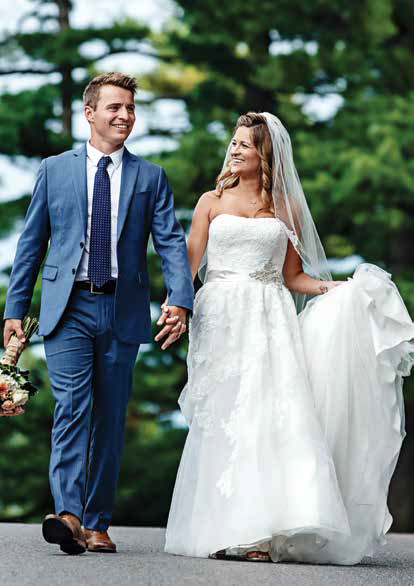 Sometimes in relationships, timing is everything. Despite knowing one another for several years, Tamy and Evan waited to be in the right place at the right time before striking up a romance.

Now living together and a little one on the way, Evan proposed to the love of his life after returning home from seeing their baby for the first time via ultrasound.

“Completely thrown off guard, I missed all the nice things he had to say and could only think of one thing to say: ‘Yes!’”

The couple began planning the wedding of their dreams at the Ottawa Hunt and Golf Club – a familiar venue for Evan’s family, who held memberships at the impressive grounds for many years.

The club’s terrace proved to be the perfect backdrop to exchange vows amongst 125 friends and family members.

“The colours in the final pieces were beyond anything I could have put together in my mind.”

The bride appeared at the top of the aisle on her father’s arm. Tamy donned a strapless Allure Bridal A-line gown from Garber’s Bridal in London, Ontario.

“My dress was originally a lace and tulle ball gown. I had taken all of the crinoline out and made it into more of an A-line.”

“I wore a necklace my mother had made out of the diamond from her engagement ring and earrings that were given to me by my late grandmother.”

Following the ceremony, guests were invited to celebrate with the newlyweds at a cocktail reception in the President’s Lounge. Delectable nibbles included oysters on the half shell, sushi, and tenderloin-stuffed Yorkshire pudding.

As opposed to the traditional tiered wedding cake, the pair looked to Valentina’s Sweets for coral, blue, and ivory cake pops and two smaller cakes – one resembling a tuxedo and the other mirroring the flowers on Tamy’s gown.

A photo booth was available for guests to throw on props and strike a pose. Provided by TapSnap, the booth allowed guests to e-mail or print their pics on the spot.

“The day after our wedding we received a copy of all of the photos from our night.”

The soundtrack for the evening was provided by Derek Wolverton (DJ Spanky) from First Quality Sound. Tamy and Evan asked guests to include song requests on their RSVP cards, which Derek gladly included in his set list. He even projected music videos to accompany each song.

“He was amazing at reading the energy in the room and playing music to keep the party going. He had the entire Hunt Club up and dancing. I still have people ask me if we have the playlist from our reception.”

The couple enjoyed a day filled with love, laughter, and the ones they hold most dear.

“I think our wedding was extremely special because we got to share the day not only with our friends and family, but with our daughter as well.”

Cheers to the happy couple! W