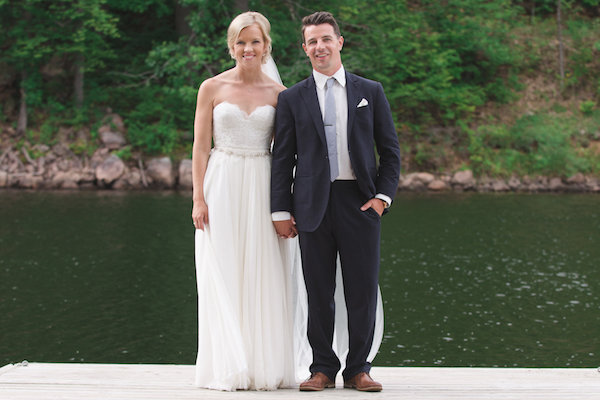 As fate would have it, Taryn and Mike crossed paths on a busy street in downtown Toronto. The pair had been conversing over the phone after being introduced through a mutual friend and had plans to meet later that evening.

“She thought I could make some teaching connections through him. We had a ton in common and started talking on the phone – Mike living in the Northwest Territories and me just moving home from working in Chicago for three years.”

They decided to meet in person in Toronto. “We had plans to meet that night for drinks downtown and by chance ran into each other during the day.”

The rest, as they say, is history. A trip to Taryn’s cottage on Danford Lake provided the perfect setting for a proposal. After shovelling space for a skating rink, Mike asked Taryn to be his wife on the ice. “It was perfect and a place I can always go back to and remember the special day.”

The couple planned a rustic shabby-chic wedding ceremony at Mike’s parents’ cottage on Bob’s Lake (about two hours west of Ottawa). The venue provided a backdrop of rolling hills, glistening water and an old barn. “It has been in his family for years and we knew how much it meant for his family to have our wedding there.”

Allowing the natural beauty of the setting to shine through, the couple chose muted hues of blush, champagne and mauve, with pops of gold and glitter for a touch of glam. The wedding party followed suit, donning different pastel shades, and the men were dapper in grey suits.

Making her entrance on her father’s arm, the bride walked down the aisle, lined with buckets of baby’s breath, donning a gown by American designer, Sarah Seven. “My breath was taken away when I saw her come down the aisle,” admits Mike. “Right then realized I was the luckiest man in the world. I had never seen her look more beautiful.”

The ethereal gown, purchased at the designer’s Chicago boutique, featured a sweetheart neckline, lace bodice and individual chiffon strands for a flowing skirt. “I wanted something classic that would match the outdoor rustic theme.”

Thanks to a few rain showers, Taryn’s entrance was even more dramatic than originally planned. “It rained as the groom walked up the aisle with his parents and the clouds parted and the sun came out as soon as I walked up the aisle. The guests and groomsmen dried quickly and it truly made my grand entrance more memorable.”

The couple exchanged vows under a birch tree arbour made with love by Taryn’s father. The trees were sourced from Taryn’s cottage, a symbolic representation of where Mike popped the question.

A native blessing was read as a nod to the Northwest Territories, the place where they had both been teachers before moving back to Ottawa. “We fell in love and built our relationship in the Northwest Territories and wanted to honour that in some way on our wedding day. We touched the lives of many students and felt as though it was important to incorporate that into our ceremony.”

Following the vows, the newlyweds enjoyed a champagne toast and mini cupcakes with their guests. The tiny sweet treats were made by Rebecca’s Cakes in Westport, Ontario.

To continue the festivities, guests were invited to hop on a chartered bus that took them to the Best Western Plus Perth Parkside Inn and Spa in Perth, Ontario. There, each table featured their own school pictures throughout the years. Alongside the photos were large balls of baby’s breath. All floral arrangements, including the bride’s natural bouquet of garden roses and dahlias (wrapped in a strand of lace from Taryn’s mother’s wedding gown) were provided by Perth’s Sweet Pea Flowers.

“I wanted lots of greenery and a variety of soft colours complementing my colour palette.”

Several personal touches were found throughout the reception, as loved ones assisted with several décor elements. “My mom is very creative and has a great sense of style so she had a big part in the décor and look of the day.” The bride’s mother created the centrepiece vases while Taryn’s sister created the chalkboard program, seating chart and signs. The bride put together s’mores kits for 112 guests.

One of the most memorable moments came during the speeches. “At the end of my sisters’ speech, they broke out in dance to a Bruno Mars song. Slowly people from the crowd started to join and it became a full-on flash mob. It was such an amazing surprise that my family and friends had been practising for months.” W