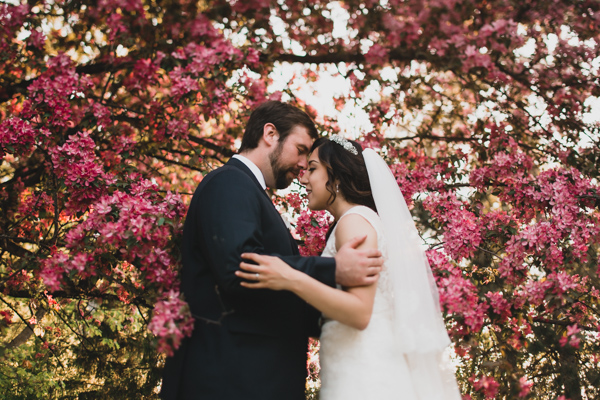 Handmade from the Heart

On the morning of May 22, Zarina cleaned her apartment and then she wrote her vows. She was gone before her fiancé and high school sweetheart, Chris, was awake as she headed out for her hair appointment — and a mimosa, naturally. Afterwards, she met her bridesmaids at the Arc Hotel and their room became a hive of activity. One girl doing hair for the other girls, one doing makeup, and one doling out the breakfast foods she’d collected from all over the city in search of the perfect pastry. After her gown from Renewed With Love was on, she was ready.

When Zarina arrived at their venue, Billings Estate Manor, the day could not have been more perfect. The sky was blue, the weather was warm, and the apple blossom tree was late so it was in perfect bloom, just for them. They had the arch where they were to be married set up just beside the tree.

Another special moment was the shared connection the groom had with their officiant. They discovered that he and Chris’ aunt had gone to school together and they had been quite close. He’d even held Chris as a baby. So they had a intimate familial connection with him.

After the ceremony, cocktails and dinner were served in a gorgeous tent, replete with chandelier set up by Dahlia Designs, by the front of the estate. On the tables were touches that the couple had put much time and effort into, from the hand-embroidered table numbers that Zarina made herself to the colouring booklets put together for the children.

Having the ceremony and dinner outdoors was important to both sides as they love to be in nature and wanted the kids at the wedding to be able to run around and have fun.

After dinner, the party moved to the RA Centre for more dancing, drinks, and donuts — SuzyQ in lieu of cake. The couple went in that direction for a few reasons — Chris is a baker so unless the cake was going to be made by him, they weren’t having it. And since they didn’t want him to have to make the cake for their own wedding, they went donuts for the masses and a little bundt cake they made together for themselves.

The night finished with more food — “We’ve been eating our whole relationship — food is really important to us. We wanted to make sure there was enough,” said Mail. There was more than enough and guests took away boxes of donuts.

And, although Zarina missed seeing them, some of their guests were privy to a Victoria Day fireworks show that was visible from outside. After a late night of friends, family, and food, the couple retired to their hotel suite to relax in the bubble bath and soak up the day. W