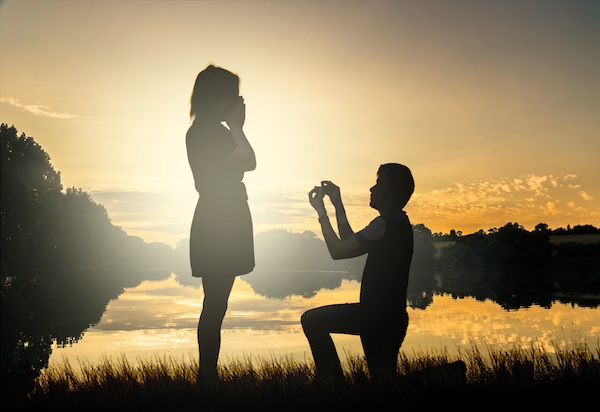 Our neighbours to the south are up in arms over NFL players who #taketheknee during the national anthem. Odds are, though, if you #taketheknee, present a sparkly ring, and ask the big question, the reception will be much more uniformly favourable.  But what does getting down on one knee have to do with proposing marriage? And where did the idea come from? Now is as good a time as any to find out.

As Wikipedia notes, “Genuflection (or genuflexion), bending at least one knee to the ground, was from early times a gesture of deep respect for a superior. … The Latin word genuflectio, from which the English word is derived, originally meant kneeling. … The custom of genuflecting, as a sign of respect and even of service, arose out of the honor given to medieval kings.”

In matters of the heart as well, genuflection is a sign of respect and of honouring someone. As event planner Cheryl Cirelli states at Love to Know, “… the idea of asking for a loved one’s hand in marriage while partially kneeling is a highly symbolic gesture embodying the very essence of committing one’s life to another. The ideas of goodwill, honor, and trust in that one person is [embodied in] opening themselves completely to another without shame or any physical defenses.”

And while getting down on one knee is an old tradition, it still has legs today. In fact a few years ago, Men’s Health and  The Knot.com conducted a survey asking about 1,500 engaged or married men and women what makes a great proposal. Over three quarters of the guys gave the bended-knee gesture a big thumbs up.  “76% of men believe they should go down to one knee to propose.”

Females agree. Marriage Proposal Do’s and Don’ts, an article on The Spruce by Nina Callaway, recommends you make the bended knee part of your proposal.  “Do drop to one knee,” she advises. “Again, times have changed, but there is something so charming and romantic about a man on one knee asking the love of his life to marry him. Even if you’re not a traditional guy, it will make the proposal more momentous.”