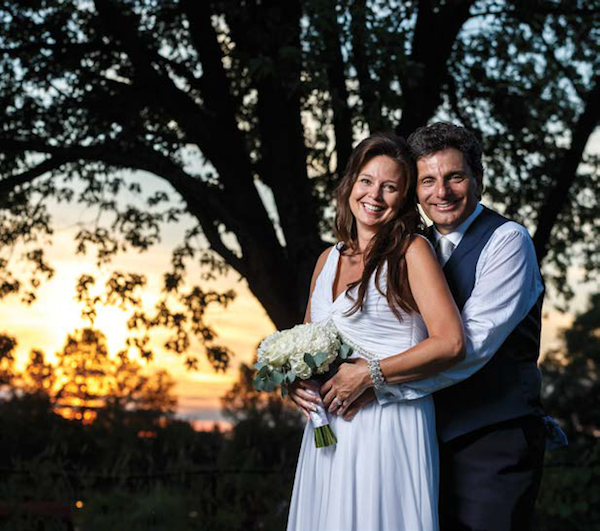 This wedding’s lovely flowers were by Trillium Floral Designs, www.trilliumfloral.ca.

The United Way has an additional meaning for Angela Lariviere and Lawrence Greenspon because the charity led to the couple going on their way — united. She was on staff and he was a senior volunteer, so they frequently met at fundraising events. During the annual campaign, he regularly spent up to 30 hours a week in the United Way building.

“One day, I went to the front desk and asked to speak to Angela,” he says. “I told her where I was and asked her to come to the front desk to let me in as I wasn’t being allowed into the building. She knew that was completely ridiculous, given that I actually had an office there, and asked if this was my way of asking her out for coffee. It was, even though I don’t drink coffee. Anyway, it was a wonderful start.”

A year later, they were engaged, and while they were on a Caribbean vacation in St. Martin. Lawrence had arranged for a table for two under tiki lights on the beach and had the engagement ring in his back pocket.

“Angela and I had looked at rings and she had seen one she really liked in St. Martin, but, as far as she knew, it was going to take a while for it to be ready,” says Lawrence.

To the music of “Unforgettable”, sung by Nat King Cole, the two danced in the sand. When the song ended, Lawrence dropped to one knee, produced the ring and asked Angela to marry him.

“Thankfully, she said ‘of course’,” he says, adding that their server asked for permission to announce their engagement to the other diners.

“We got a standing ovation from everyone,” says Angela. “And, it seemed that practically everyone in the resort was having dinner on the beach that night.”

They married the next summer in their own backyard. “We live on the river, so we had a beautiful backdrop,” says Angela, adding that, with some difficulty, they kept the guest list to 100. “We wanted to keep it small and intimate so that we could spend time with every guest and really celebrate with our closest friends and family.”

A wedding blended with religious heritages and cultures

The wedding date, July 18, 2015, was also important to them, says Lawrence, who wears a Chai on a gold chain around his neck at all times. In Hebrew, the word chai, meaning life, also stands for the number 18, and the symbol is often worn as an alternative to the Star of David (Magen Dovid).

The couple wanted to blend the traditions of Judaism and Catholicism in their ceremony, in recognition of their religious heritage, says Angela, adding that in an effort to involve as many of the guests as possible, they chose not to have a formal wedding party.

Instead, they had a candle-lighting ceremony to represent Roman Catholicism and had several guests placing candles at either side of the altar, set up in the marquee. Angela’s older son, Mackenzie, walked her down the aisle to meet the groom under the chuppah — the canopy under which a Jewish marriage ceremony is performed. Jewish tradition was further honoured with the groom breaking a glass.

“Our wedding also became very much a blend of the people of different cultures that we are close to,” says Lawrence.

The wedding ceremony, which was conducted by Judge Colin MacKinnon, began with a piper moving from the dock on the river. “He walked very slowly up to where the wedding was taking place. The sound of the bagpipes echoing across the river was incredibly haunting,” says Lawrence.

Later in the evening, a “flash mob” of guests delivered a sequence of Bollywood dancing — the mix of dance styles often used in East Indian films. “We didn’t know it was coming,” says Lawrence, “but apparently they had been practising for months.”

Even the bridal gown had an original touch. Purchased from Kimberley Wilson Bridal and Fashion Outlet in Beechwood, it was equipped with a series of hooks and loops that made it possible to convert it from a long to a short gown. That was important, says Angela, because she needed more freedom of movement for the wedding dance that had been choreographed for them.

The couple also placed their own spin on the speech-making section of the event. Three speakers on each side spoke of the couple’s past, present and future. The past was represented by Lawrence’s daughter, Maja, and Angela’s father, Leo; the present by Lawrence’s friend Perry Mody (who, with his wife, organized the Bollywood dancing) and Angela’s sister, Lee Ann; and the future by the neighbours, Mike and Mary Theresa Gelineau, who have become close friends since the newlyweds bought their bungalow on the river.

So began Angela and Lawrence’s journey on their united way.