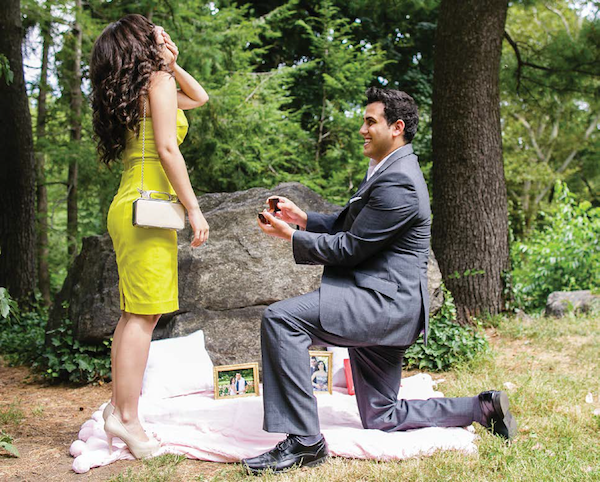 What happens when a woman in love gets the proposal of her dreams? Meet Elena Yammine and her fiancé, Johnny Azzi, an Ottawa-based couple who have been together for five years. The magical story of their proposal is as unique as they are. Johnny proposed to Elena in the middle of New York City in beautiful Central Park. This is their story.

After four years in a committed relationship, Johnny asked my father for my hand in marriage. He invited my father to lunch and began the conversation with an odd statement. “I don’t want to date Elena anymore.” My dad looked puzzled and replied, “Does she know yet?” With anger engraved on his face, Johnny knew he couldn’t keep it in anymore. “I don’t want to date your daughter anymore because I want to marry her.” And that’s when Johnny began planning our perfect proposal.

It all started one weekend when Johnny’s sisters asked me to join them on a girl’s trip to New York to celebrate the end of summer. I was most definitely on-board! We spent the entire month planning our trip, but little did I know what was in store. On August 21, 2014 Johnny travelled to New York to make sure everything was perfect before we arrived.

I arrived the following day with the plan to catch a cab to Times Square to meet the girls (who were supposed to arrive a day before me). I approached the door and there was Johnny all dressed up. I knew right there and then the day was going to be special.

We made our way to the door to be picked up by a limo. We walked all over Times Square. This was my first trip to the city and I was in complete awe. Johnny suggested we go to Central Park. As we walked through the park, we reached a pathway filled with pink roses. At first, I had no idea it was for us. But as we approached the end of the path, I saw a lovely picnic set up for two.

Johnny proceeded to describe the highlights of each year we had been together – the good and the bad – and then it happened. He got down on one knee and asked, “Elena, will you marry me?”

I was speechless. When I saw the ring (it was the exact ring I wanted) I leaned in to give him a kiss, and he asked, “Is that a yes?”

To that I replied, “That’s a thousand times yes.” W

Announcing Your News to the World

Romantic Time with your Spouse-to-be