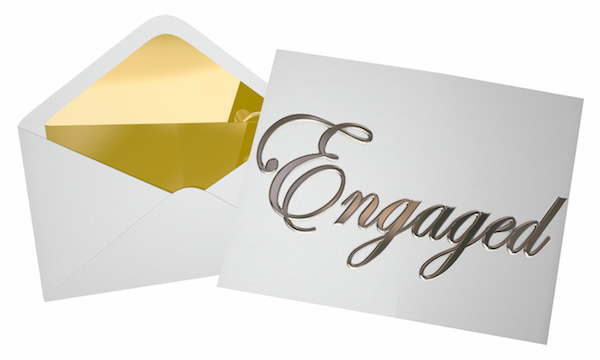 You’re engaged and you want the whole world to know! Rather than just shouting it from the rooftops, here are some effective ways to announce your engagement, and the etiquette of whom to tell first.

Immediately after your engagement, start off by telling those closest to you:

If you have any children from a previous marriage, they should be the first to know. Hopefully, you’ve prepared them for this possibility. Consider that this may be hard news for them, and reassure them that your new spouse won’t replace them in your heart.

Typically, the bride’s parents are told first, then the groom’s immediately afterwards. While a visit in person is nice, if your parents live far away, over the phone will work just fine. Both of you should be present.

Grandparents, siblings, and other close relatives

Even if you want many of your friends and family members to be surprised all at once, consider who would be hurt to not know immediately. You can tell them all at once at a family dinner, or simply tell them by phone.

A few phone calls will do here, unless you want to surprise everyone and tell them all at once.

Decide if you want to mail announcements to friends and family, publish an announcement in your local newspaper (or national newspaper), or announce it as a surprise at an engagement party.

Publish your big news
Start off by calling to ask if they have any guidelines, deadlines, fees, or regulations about announcements. See if they accept pictures, if that’s something that interests you, and ask if pictures must be black and white or colour. (Make sure you put your name on the back, and include a self-addressed stamped envelope so the photo can be returned to you.)
If they don’t give you strict guidelines, follow etiquette’s lead. Typically, announcements include information on the two of you, including career and education credentials, and your parents’ names. If your parents live in a different town, you should also include their hometowns. There’s no need to include the wedding date, and some purposefully omit it, as they don’t want to be targeted by burglars who will thus know when they’ll be out of the house. You might choose to say something like, “A fall wedding is planned…,” which helps diffuse the millions of questions you inevitably will receive.

Announce your engagement at a party
One of the most fun ways to spread the news! You and your fiancé will get the joy of seeing everyone’s faces when they learn you are engaged, and the fun of an engagement party without the awkwardness of asking for gifts. Make sure you don’t invite anyone to the party who won’t be invited to the wedding, and don’t do it at someone else’s event (such as a birthday party), where they might feel upstaged.

Create a wedding website
The most modern way to make the announcement! Many companies offer easy-to-create personal websites that will help you keep guests updated on the details of your wedding. Once you’ve created a site, you can send an e-mail letting friends and family know the URL. This is a very informal way to announce your engagement, and has many of the same limitations that a printed announcement does, plus the added disadvantage that it will omit guests who don’t own a computer. I suggest that if you create a wedding website, you also announce it in a more traditional way.

Mailing formal engagement announcements
This is a very traditional way of announcing your engagement, but it’s one that should be used cautiously. You’ll need to be sure anyone who receives an engagement announcement will also be invited to the wedding, and that it won’t be mistaken for an invitation. Still, if the idea of beautiful cards sharing your good news is too delicious to resist, go to your local stationery store. You can word them however you wish, but typically wording is similar to what appears in a newspaper announcement. If you include your wedding date, it can double as a save the date.

If your newspaper doesn’t give you strict guidelines, here are some sample wordings of engagement announcements to follow. Note that etiquette stipulates that the groom’s family shouldn’t be the ones to announce the engagement, and it should be someone other than the bride and groom if at all possible. That being said, rules are made to be broken!

Ms. Alice Smith announces the engagement of her daughter, Wilhelmina Smith to Peter Hightower, the son of A.J. and Margaret Hightower of Halifax….(Follow the rest of the wording above. You may choose to include “Ms. Smith is also the daughter of Casey Smith of Hamilton,” as the closing line, but this is not mandatory.)

Ms. Jenifer Miner announces the engagement of her daughter, Maria Miner to Ezra Goldblatt. Ms. Miner, also the daughter of the late Jonathan Miner, graduated from the University of Waterloo and is the manager of the Four Winds restaurant. Mr. Goldblatt, the son of Micah and Linda Goldblatt, graduated from Brock University and is a teacher in Saint Catharine’s, Ontario.

Mr. William George, of Cornwall, and Ms. Martha George, of Thunder Bay, announce the engagement of their daughter, Angela Renee….