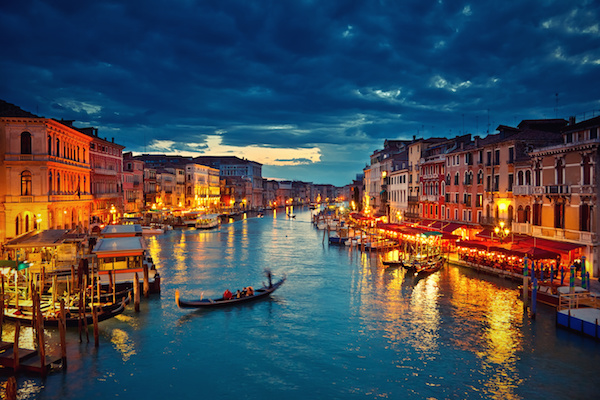 Swept Away in VENICE

The poet, Lord Byron, called Venice “a fairy city of the heart.” With its picture-perfect canals and palaces that seemingly float on water, Venice remains one of the world’s most romantic destinations. Drifting down a canal in a gondola, snuggled together while the gondolier serenades you, spins a layer of magic over your honeymoon. At sunset, pass under the Bridge of Sighs and kiss. Then, according to local legend, you’ll be granted eternal love and bliss. Once a flourishing trading centre linking the Orient and Europe and a great military power — capturing Constantinople in 1204 — Venice reflects its heritage through a blend of Byzantine and Italian architecture. The lively art and culture scene dates back to the Italian renaissance. Spread over 117 islands, laced by 150 canals, Venice consists of strikingly different neighbourhoods. Candy striped pylons in Central Venice stand sentry outside tiny docks fronting ornately decorated stone palaces. The mansion’s steps descend into the gently lapping waters of the Grand C anal, which runs from the train station to the city’s main square, Piazza San Marco.

The heart of Venice Europe’s most famous square is the spiritual and artistic heart of Venice. Basilica di San Marco dominates the vast piazza. Built to house the body of Saint Mark stolen from Egypt in 828, the huge Romanesque- Byzantine style church is decorated inside and out with marble plundered from Constantinople after its conquest. Also looted, were the four horses prancing over the entrance. To protect the sculptures from pollution, copies have replaced the originals. Dazzling mosaics, also from Constantinople, depict scenes from the New Testament. Alongside the basilica, the red brick bell tower, Campanile. Corrupt priests once dangled from the tower in wood cages. The top of the 99-metre tower offers a panoramic view of Venice. Try to avoid going at noon when the ringing bells can be deafening. Until 1807, the rulers of Venice, the doges who lived in the adjacent white and pink marble Gothic palace, used the basilica as their private chapel. Large statues of Mars and Neptune guard the Giant’s staircase in Palazzo Ducale’s courtyard. Upstairs, exquisitely decorated rooms with frescoes by Titian, carved wooden ceilings and numerous stunning works of art. On the east side, the Bridge of Sighs connects the palace to the old prison. Art museums, housed in palaces exhibit works by famous artists, also let you peek into the past lives of wealthy Venetians. A plaque on the bridge near Palazzo Ca’ Rezzonico commemorates the poet, Robert Browning who lived and died in this Grand Canal palace. “Open my heart and you will see graved inside it, Italy.” Now a museum specializing in 18th century Venetian art, the palace reveals the grandeur of its past through antique furniture and tapestries within gilded ballrooms and frescoed salons. Another canal-side palace, previously home to the eccentric philanthropist, Peggy Guggenheim, presents contemporary European and American art. Much of the work belonged to the rich American whose white stone mansion looks modern but began as an 18th century palace. The city’s major art museum, Gallerie dell Academia, located within a convent complex, overflows with Madonnas and other 14th to 16th century religious works removed from churches.

Transportation in Venice is by foot, gondola, water taxi or vaporetto, Venetian water boats that zigzag to stops along the Grand Canal and ferry you to other islands. Part of the joy of exploring Venice is to wander down the maze of narrow, twisting laneways. You never know where you’ll end up. Hidden behind some grand houses is the Jewish ghetto. The word “ghetto” comes from the site of a mortar foundry around which Jews were ordered to live in 1516. The Ebraico museum, displays examples of textiles and wordsmithing produced by the community between 1516 and 1797.

A 50-minute ferry ride from Piazza Roma takes you across the lagoon to Murano. Using century old techniques, Murano’s glass makers craft everything from chandeliers to contemporary art pieces. Stroll the streets to discover glassware shops and glass factories giving free tours. If you’re a true glass enthusiast, the glass museum shows samples of glass from Egyptian times to present day. A 25-minute ferry ride from Murano brings you to Burano. Pink, red and blue-painted houses make a colourful picture in the afternoon sun. Fishermen’s wives once sat outside the houses producing intricate lace work, while their husbands plied the lagoon. The Lace Museum celebrates this heritage with over 400,000 pieces. The island is also known for its seafood restaurants: the most famous dish, risotto de g , a local fish. Relax one day at the beach. A 10 to 15-minute vaporetto ride transports you from Piazza San Marco to the Lido di Venezia, a 11-km-long sandbar with two public beaches.

Accommodation is expensive in Venice, but don’t try to economize by booking a place on the mainland in Mestre. Instead, stay in Venice. When day trippers leave, the night’s quiet, intimate atmosphere and lights from palaces shimmering upon the canals evokes a romantic, almost mystical atmosphere. In Piazza San Marco, under the glow from the illuminated basilica, dance to outdoor orchestras playing for guests sitting in the sidewalk cafes. The hotel you choose depends on whether you want to be in the middle of the action or in a quiet area far from the bustling tourism areas. Hotel Canal Grande occupies an 18th century palace overlooking a quiet square along the Grand Canal. Situated near the train station, the boutique hotel maintains a Rococo-style decor of gilded furniture and Murano mirrors and glassware. The junior suite’s canopy bed adds that extra touch of romance for honeymooners. Closer to San Marco square but situated on a quiet small canal, sits Hotel Al Ponte Mocenigo. Access is via a marble private bridge. The four-star hotel blends the modern and the traditional in its 11 suites. Enjoy their Turkish bath with chromotherapy. In the spacious junior suite, relax on your private balcony and indulge in a hydro-massage bath before slipping into your canopied bed. A Moorish-style 15th century palace, houses the four-star Hotel Palazzo Stern. Close to Ca’ Rezzonico museum, its waterside terrace is charming. There’s also a rooftop terrace with a jacuzzi. Oriental carpets, silk wall fabrics and antique furnishings contribute to the luxurious atmosphere typical of Venice’s grand residences. Five junior suites all overlook the Grand Canal. W

Tips for a Romantic trip

There are no direct flights from Ottawa to Venice. You must make at least one stop.

September, May and June are the best months weather-wise (July and August can be extremely hot). 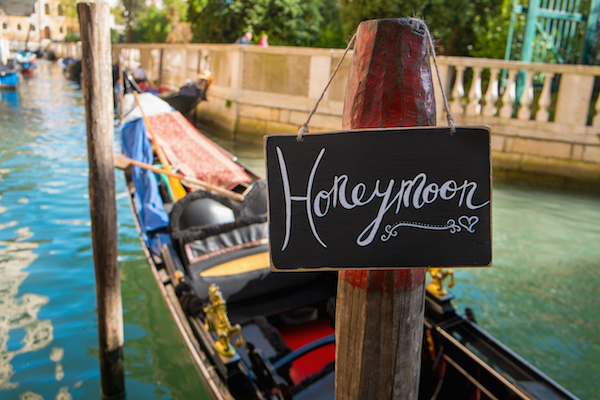