When couples tell us their wedding stories, they sometimes spend almost as much time describing the proposal as they do the details of their wedding day. No wonder. Both occasions are big, exciting milestones in life, and clearly plenty of thought, care and ingenuity go into popping the question.

For instance, Jordy Monahan took the tradition sky-high. After six years dating his girlfriend Ashley, he proposed … an airplane ride. In early November of 2016, Jordy talked Ashley into a sightseeing flight, suggesting it would be something fun to do. Since he works on dairy farm, he also told her he would take photos of the farm while they were in the air.

Early in the morning on the day of the planned trip, Jordy mentioned that he had to work at the farm and would be home before noon to go on the plane ride. Once he returned home, Ashley explains, “We headed to the Smith Falls airport, got into a small Cessna plane and up we went. I had no idea that Jordy had been in contact with the pilot for months in advance, planning this surprise.”

As the plane soared over 55 acres of farm fields, in one of them there was a real proposal: “Ashley will you marry me?” Jordy had used farm discs to pop the question. “He did this all by himself and without any GPS Tracking devices,” Ashley mentions, adding, “The question mark was backwards by accident. He was just so excited to ask, and it wouldn’t have been Jordy’s proposal if something didn’t go wrong.”

He definitely got the right answer, though. “Yes!” was the enthusiastic response. “Everyone on the aircraft communication system could hear the proposal and started congratulating us,” Ashley recalls. “Jordy was prepared with music and champagne to celebrate with when we landed.  It was over the top and amazing but he is just that type of guy.” 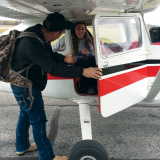 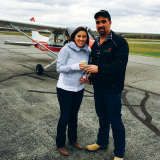