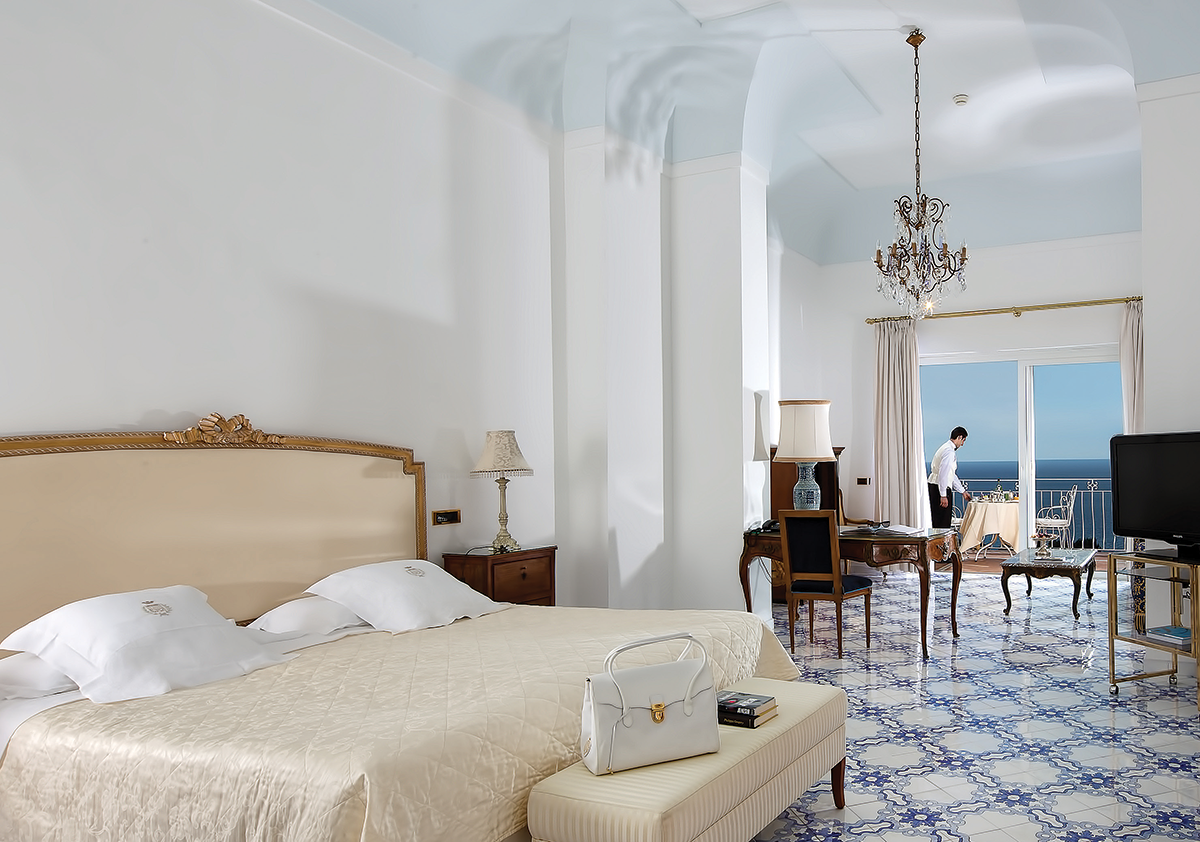 The Isle of Capri is one of the most romantic destinations in the world. Even the name suggests La Dolce Vita, a sweet life full of pleasure and indulgence. Once the summer home of Roman emperors and jet-setters, the tiny island is beautiful, and its luxurious accommodations offer a sensuous backdrop for a honeymoon. Dramatic limestone cliffs and white houses clinging to steep hills rise above clear turquoise seas. Known as “The Isle of Sirens” in Greek mythology, this enchanted land promises passion and adventure. Walk on trails with panoramic views. Explore the ruins of English forts. Wander through elegant old villas. Swim from beaches secluded within miniscule coves. Rent a boat for a dreamy cruise around the island. Glide through a small stone portal into the famous “Blue Grotto.” Sunlight shimmering off the sea turns the water a luminescent blue. You can only reach the island by boat. Ferries and hydrofoils dock at the port where a funicular or bus takes you up the cliffs to the two main towns. If you choose the bus, sit on the side opposite the bus driver. You’ll quickly see why locals call the road “Mama Mia.” The bus weaves up through hairpin bends, the windows overlooking sheer drops down the cliffs. Buses take you to either of two towns. There’s Capri, 183 metres above the port, and, on a higher plateau on the other end of the island, you’ll discover Anacapri.

Majolica tiles festooned with flowers and village scenes embellish the benches and stairs in Anacapri’s main square. Beyond the 14th century baroque-style Santo Sofia church with its fossil-embedded holy water basin, shops sell cameos, perfume first made by monks in 1308, and Limoncello. The lemon liqueur was invented in 1795 by an expat Brit, Sir Nathanial Thorold. Individual chairlifts glide up 589 metres to the island’s highest point, Monte Solaro. A small café and lookout offer picturesque views of the island and Bay of Naples. You can opt to hike the trail up the mountain. An ancient staircase, the Phoenician Steps, constructed by Greeks between 7 and 8 BC, connects Anacapri to the port and two rocky beaches. At some beaches, clubs provide changing rooms and chairs and umbrellas to rent. Just above the stairway in Anacapri are the glorious gardens of Villa San Michele. Today, the villa itself is both a venue for musical concerts and a museum displaying furniture and archaeological finds. Purple bougainvillea clings to the stone walls and terraces lining the narrow lanes leading downhill towards the town of Capri. En route you pass Casa Rossa where, inside, you’ll see paintings portraying views of the island between the 19th and 20th centuries, along with Roman statues recovered from the Blue Grotto.

A 17th century clock tower dominates the Piazzetta, the main square in the town of Capri.  Café tables nearly cover the small square, which is the centre of island life. On the narrow side streets, you’ll discover artisan shops, Italian high fashion boutiques and fashionable bars. Steps away the island’s main place of worship, the rococo-style Santo Stefano Church, dates back to 1700. Under the church’s vaulted ceiling and Murano chandelier you’ll see a silver statue of the island’s patron saint, San Costanso. You’ll also discover a relic of his bones and an exquisite tiled marble floor lifted from the villa of the Emperor Tiberius. Villa Lysis is another enchanting spot you’ll want to check out. It was built for a Parisian count who exiled himself here with his lover in 1904. The opulent home’s salons, decorated with marble and gold leaf, reflect styles ranging from Louis XVI to Art Nouveau. In summer, the residence hosts concerts, dances, exhibitions and weddings.

Sprawled over a cliff below the town, you’ll come upon a medieval monastery: the Charterhouse of San Giacomo. The 14th century masterpiece is the island’s oldest building. Turkish pirates sacked the complex during the 1500s. Later, Napoleon’s troops commandeered the monastery and banished its Carthusian monks from the island forever. The Italian government operates the complex as a library, museum and concert site. Adjacent to the monastery, on the ancient grounds of Emperor Augustus’ villa, there’s a series of terraces and floral-lined pathways with sweeping views of the sea and Faraglioni, the three spurs of rock abutting the island. German steel industrialist Alfred Krupp created the panoramic Augustus Gardens in the early 1900s. He also commissioned the zigzagging Via Krupp, a switchback paved footpath he used to descend from his villa to his yacht in the port.

Anacapri hotels appeal to guests wanting private surroundings. Most day visitors to the island never venture out of Capri. Casa Mariantonia is an intimate hotel that sits in the centre of town. Its grounds include a good size pool and a lemon grove. Guests dine on traditional Italian cuisine under lemon trees. The boutique hotel’s low-key atmosphere has drawn such guests as French philosopher Jean-Paul Sartre.

On Capri’s main square is the island’s oldest hotel, a luxurious five-star landmark called Hotel Quisiana. Dr. George Clark originally built it as a sanatorium, then transformed it into a hotel in 1861. Amenities include a spa with heated indoor pool, a panoramic outdoor pool, tennis courts, theatre and scenic terraces with dramatic views.

Within walking distance of the main plaza is the Capri Tiberius Palace Hotel & Spa, another luxe hotel noted for its amenities and services. Majolica floor tiles brighten some of the individually decorated rooms. There’s a restaurant serving traditional and kosher cuisine, spa, library and Roman-style indoor/outdoor pool.

Isle of Capri does not have an airport. You reach it by a 20 to 80-minute ferry or hydrofoil ride. The closest departure cities are Naples, Sorrento and Positano.