“The emotions start when the music starts.” 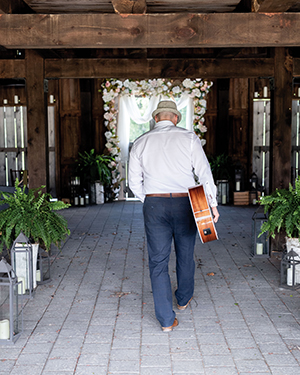 Since Dylan Holton’s first professional wedding gig a decade ago, the 32-year-old entertainer has performed all over the world. Sprinkled like confetti though a touring schedule for his original music, including shows on cruises to the Caribbean, Bahamas, Hawaii, Alaska, Australia and Fiji, “there would always be weddings,” he says. Hundreds of weddings. There would be love, too. That’s what brought him to Ottawa. “I married my best friend in 2017,” he says, “and it was the best day of our lives. Since then we have travelled together, bought a house, started a family and supported each other in our passions. I relive my wedding day every single time I perform a wedding.”

Now a father of two, Dylan keeps right on singing. He even performed at Brittany and Mike’s dream day at the NAC that won the 2020 Wedding of the Year Award. (See page 44.)

Originally from Pictou County, Nova Scotia, Dylan Holton grew up in a musical family and has been belting out tunes since he was little.
But for a long time another passion also claimed his heart: Baseball. “After playing a couple years in the Western Major Baseball League (now the Western Canadian Baseball League) out of high school,” he says, “I won a NCAA National Championship in North Carolina while on scholarship and went on to play in a semi-pro league in Virginia.” When he hung up his cleats in his early 20s, he picked up his guitar and started performing. Soon he was getting requests: “Do you perform at weddings?”

Today, Dylan says, “I’m literally doing this because I love it. In a way I see it as being of service, giving back and helping people. Music is
therapeutic and weddings are a big deal. It’s a big day if not the biggest day of the couple’s lives.”

Not only does he bring love and passion to his live performances to help set the tone for the special day, he also prides himself on finessing
the technicalities: “You need to display your craft in a welcoming manner. Learning the dynamics of popular songs by known artists and performing them at just the right volume is absolutely key.”

Not only does the volume have to be pleasing for the three-year-old ring bearer at the front, he notes, it also must project comfortably for
the great grandparents at the back. That’s why Dylan leaves nothing to chance. “Showing up way too early for weddings is what I do.” Sometimes he plays for half an hour after setup, so he’ll receive feedback from other vendors. “That’s when I get my affirmation that it’s going to be a beautiful and successful day.”

It’s well worth the effort, he points out: “Honestly, it’s music that makes people feel the emotion when someone’s daughter is walking
down the aisle holding her father’s arm. Tears are flowing, and in every wedding I experience, the emotions start when the music starts.”

Prior to the big day, wedding clients are presented with an updated list from which they can select songs to be performed during cocktail hour, the processional and/or the reception. Sometimes they request songs by artists Dylan’s never heard of. “That’s the fun in this as I’m always learning and being introduced to new and exciting music. It’s their wedding, it’s their song, I’m there to perform a duty for them, and
so I’ll learn anything.”

Whether at a 2020 micro wedding or at a larger event booked for later, Dylan says his live music provides a sense of intimacy and belonging.
“My music will add that special ambiance you’re looking for.” He feels the love too. “At the end of the night when I pack up my guitar and say [goodbye] to the newlyweds, I always hope the next wedding I perform will touch me just as it has that night, and every single time it does.”
www.dylanholton.com

Dylan’s
TOP FIVE
The crooner’s current list of most requested wedding songs is topped by these romantic tunes:

Your Wedding Gown: Advice from an Expert